We should not judge people by their peak of excellence; but by the distance they have traveled from the point where they started.

I remembered the good old India days, almost before I left for MS in USA, after watching the video promo of "Satyameva Jayate".

The video shows how your behavior at Traffic signal can tell a lot about your personality. In crux, at night when there is reasonably less traffic, while most vehicles pass red lights, a single car stops, and after the car has stopped as a chain reaction, other vehicles also eventually stop at the signal. And then Aamir khan says, this guy who stopped first will watch our show, while the others who just passed by will not....He is watching from a balcony overlooking the signal.

What reminds me about this video, is this is the exact same thing that I used to do back in India to make people stop at Traffic signals. No matter if there is any body at the signal or not, I would be standing there with my motorbike until the signal turns green. Some vehicles would pass by me, but eventually watching me stopped, many vehicles would stop and wait.

Simple acts like this, can bring out the leader in you to tackle the social problems that India faces. People just want a representative to follow, and if your intentions are good, they will follow you. What matters is the ability to stand out from the crowd, stay put no matter what happens, and show that courage to take the first step. And then you will have followers.

Satyameva Jayate .....Long live the truth and my country.
Posted by Mrunal Gawade at 8:22 AM No comments:

A social experiment ....Which is a more tough job, being Doctor or being an Engineer?

The title is a bit misleading. I quote it just to give a glimpse into the kind of dilemma jobs related to the professions like Doctors vs Engineers face.

Any profession that deals with human element directly in day to day activities, I quote it as a Doctor's job. For e.g. medicos, psychologists, physiotherapists, therapists etc. etc. Any thing that has a flare to deal with emotions and psychology.

Any profession that does not deal directly with human elements on day to day basis, I quote it as an Engineers job. For e.g. Engineers, scientific researchers, ......

When human elements get involved as a part of your job, many times the sufferings that the person is going through, makes the job difficult to deal with. For e.g. when a doctor treats a medical emergency, and the relatives know the skills of the doctor could make or break the critical situation, Doctor's role becomes critical. Having extreme control over one's emotions is extremely critical in such situations. When a psychologists treats his patients, listening to their sad stories is a part of the job and controlling ones emotions is a critical part to not mess up with the situation. Treating patients as subjects, and not getting emotionally involved is a critical part of these kind of jobs, because a lot of personal success also depends on how emotions could be handled to keep the situations in control.

An Engineer type of job then could be said to be not involving these kind of stresses, as one deals with machines, and there ought to be no emotions involved, no attachments generated, so the stress generated due to these factors is much lower. Its a different story that the stress due to other factors such as intense deadlines is a different aspect. However, overall emotional maturity of an Engineer should be relatively less compared to the people involved in the Doctor's kind of job, simply because these kind of jobs simply do not need that skill set.

Is it the case then that many engineers are also very less adapt in social situations, where emotions are involved? For e.g. how would a very smart engineer behave in a situation that needs extreme emotional control, while dealing with a subject. For e.g. lets consider the Engineer decides to enter into a social experiment. (Many engineers are actively involved these days in philanthropically activities etc. and have to deal with socio-economic problems and related situations.) Many times these kind of dealings bring it with, unusual circumstances where after a prolonged encounter with a subject, the Engineer might lose his emotional control and get attached to the subjects, that he is experimenting with. Now, mind you, the Engineer is very smart and he knows what he is doing, but after staying in the similar situations constantly, one tends to lose focus of one's larger mission and tend to get localized in local situations. As an Engineer it is very difficult to realize this kind of situation and get out of it asap, because the involvement in such activity brings a certain attachment, and the subject does not remain the subject any more, but becomes a part of the social structure around. Coming out of this local situations then becomes a nightmare, and this is where the jobs like Doctors win, because these people have developed an immense experience to work in similar situations, while staying emotionally strong.

The world needs both Doctors and Engineers to do the kind of work, that needs to be done, done. What is important is how people involved in one kind of job has better advantages in certain situations, than others. And how the people who do not have such advantage could be made stronger to deal with these kind of social situations ......

Posted by Mrunal Gawade at 7:46 AM No comments:

Life moved in a very fast lane since I finished my bachelors (undergrads) in 2004 ....

I happened to come across my first blog today during some random search ...Internet never forgets things ...., http://mg-therider.blogspot.com/ which I had created when I was exploring outdoor activities with my friends, during my initial job days ....

Then I stopped writing there and created another blog, once started in Masters program at UC Santa Cruz, USA. It was titled "My thoughts ...." I described my personal experiences etc. and my thought process about the new world surrounding me...The blog was to a great extent my emotional connection and gave vent to my feelings as they were being shaped by surroundings in a new distant land called USA. I also wrote lot of academic articles guiding students etc for their masters program... I handpicked some of these articles and moved them to my current blog.

Then I killed that blog once I was back in India, since I felt I was maturing and the blog did not serve the purpose it was started with, and then I started a new blog "Learning never stops...." more on the intellectual aspects of things, that I was planning to explore, new ideas, new technologies, new frontiers and challenges on socio-economic revolutions that I was planning to do while in India, and  the latest technologies, and my thought process on related things ...So this is the blog that you see now ....

So the times have changed fast ...I do not remember how fast life moved since I started my MS program, and when I matured from being a jumpy 25 year old kid to a maturing adult of 32 years that I am right now ....

I felt like sharing this photograph of mine, which shows me in a sporty look when I was 25 years old, which I used to love so much... It was taken during a motorbike ride to a nearby hill station. I was an avid motorbike rider...

It will stay here just as a reminder of the good old days.... 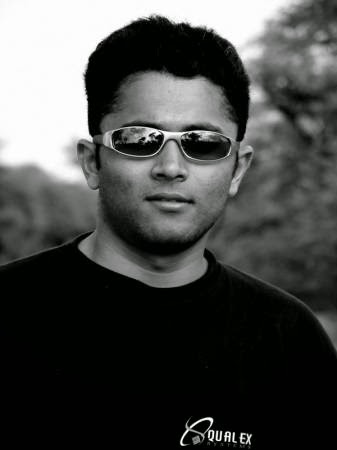 Posted by Mrunal Gawade at 8:48 PM No comments:

Thank you for your visit.
This blog is about research, good education practices and socio-economic aspects in the technology world, through my experiences.
I hope you would find it useful, informative, and thought provoking.
Thank you.
Mrunal

Impact your World - The causes

Foundations for Innovations, and Social Entrepreneurship

Mrunal Gawade
Amsterdam, Netherlands
Hi. I am a PhD student at Centrum Wiskunde Informatica (CWI), Amsterdam. I was a master's student at Jack Baskin School of Engineering, in Computer Science department, at University of California, Santa Cruz, USA. My research interests are in technology aware socio-economic research and multicore query parallelization in database systems and systems in general. Thank you for your time visiting my site.